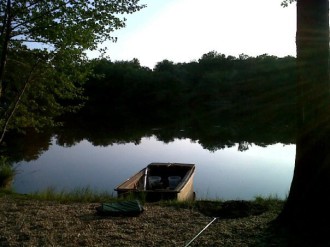 Murphy's Lake is a mature 200 year old 9-acre lake set in beautiful surroundings in the Dordogne Region of France, which is situated in the middle of the Double Forest.

There are many features including overhanging trees, lilies, tree stumps and snags, with depths ranging from 1ft up to 13ft. No long-range casting is required (maximum 70 yards). The lake has its own water source fed by a natural spring. Facilities include an on-site toilet and electricity for charging mobile phones, iPads and bait boats. There is also a shower block available a short drive away. The lake is heavily stocked with huge mirror, common and leather carp. Fish are caught from all swims and at all depths. 2008 produced 3 different 60lb fish, biggest being 63lbs, 12 fish of over 50lbs, a 59lb common and loads of 20's, 30's and 40's. 2009 season produced even bigger fish, five different 60's were caught weighing up to 64lb, also many 50's, 40's, 30's and a few doubles. 2010 / 11 were the best seasons so far at Murphy's Lake. Hundreds of carp were caught with 6 sixties gracing the bank! Our 2012 / 13 and 14 seasons have been quite remarkable, 2014 produced no fewer than an amazing 15 different 50lb carp.

With the fish growing and growing, now is the time to book Murphy's Lake and smash your PB!